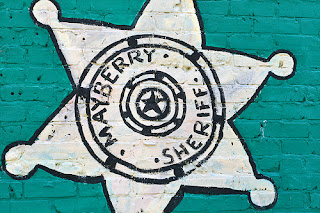 When you're a young adult, you start putting things together. You start making your own sense of the world. As a dad, I want to give you a few head starts. Hand you a few nuggets of wisdom and wonder. We've been trading films and TV shows to fill in some blanks.

You're already a They Might Be Giants, Star Wars, Tim Burton, Queen and David Bowie fan--very cool.

We've had conversations about jokes in TV shows and movies that you didn't get, so I thought it was up to me to 'buy you a clue'. We've been calling it a guide to modern cultural references. It's more than just a course in pop culture, but a course in understanding how modern culture is shaped and what the core pieces are.

It's more than WWII, The Beatles, Elvis, The Wall, Freddie Mercury, Andy Griffith, and The Dark Crystal. There's much much more. But those are great starts.

This is part of your list or guidebook to understanding and enjoying the in-jokes. You only get one first look at a show or movie and if you aren't properly prepared, those quips and barbs are going to continue to just shoot right on over your head. We're all in this together... Brazil.

Let's make some lists of films loosely grouped by themes. Our first will be musical movies, but not necessarily musicals. Some will require some parental guidance or discernment. There are certainly images in these films that a lot of parents would have issue with, but even an R-rated film from the 70's, like The Wall, has some discretion and restraint, but clearly requires discussion about violence toward women, racism, and fascism.

In the first list, we discover that these certainly don't pass the Bechdel Test. You might even think that to be a woman in a musical requires the character to actually be a prostitute, but that discussion often isn't limited to just musicals.

Reflecting on the A to Z experience

Blogging in a vacuum isn't very much fun. The wave of activity I signed up for by participating in these posts is a like running a marathon, I suppose. {I've never run a marathon, but after running a mile once when I was kid, I bent over and threw up.} I'm not feeling nauseous, I'm feeling a little bit accomplished. This year I did complete the challenge. I did browse the other participants' posts and started new conversations with new people and stirred up new conversations with old friends.

The blogs I follow and link to on the far right column of this blog are a mix of blogs I'm interested in, but also blogs of people I have started to really admire as writers.

These bursts of content, whether relevant or not, are the hurdles in the race. This year we had 1000+ people sign up to publish one post per day having something to do with a letter of the alphabet. A little trite, but as a club activity, it's a lot like a team building activity. At work, I was once asked to teach someone to juggle three balls. I didn't have any juggling experience, but I had to do it anyway. I learned to communicate and give directions even though I wasn't sure of the subject matter. I had been given all the details and tricks I needed. With practice my partner started to get the hang of it.

This exercise is very much like that situation. As we all scrambled to come up with ideas, some people dropped balls, fell over the hurdles, or out right threw up all over the track. {What-ever, you get the picture.}

We were also asked to visit the people who commented on our posts and look around at the other runners while we ran. I did try to CONTROL CLICK on the names and blog links to open their posts in new tabs. My strategy was to open several tabs and hunt for new interesting blogs as I prepared my posts and responded to comments. I started focusing on the Educational blogs first. I follow a lot of homeschooling people on Google Plus, but found so many new exciting people running alongside of me.

If you participated with me on this journey, I hope you didn't trip up over any of the flying balls or falling runners.

Email ThisBlogThis!Share to TwitterShare to FacebookShare to Pinterest
Labels: A to Z, Group Blogging, writing

Zymurgy on the shelf or ZZzzz And Scene. Goodnight! Exploring storytelling through dreams.

ZZZ, are we cheating by using a string of ZZZ's for the last post of the A to Z Challenge? Okay, let's talk about Zymurgy instead. Zymurgy is the study or practice of fermentation in brewing, winemaking, or distilling. It's the last entry in my little computer dictionary. How fitting is that? Let's look back through some posts to explore some choice posts on fermentations:


On to the ZZZ's conversation anyway...

We've established that we're storytellers and we're going to let stories create the structure for the learning environments we create around us. Some of us are writers, published or not, writers of novels, poetry, and whatnot. We all have ways of conjuring up a story to tell. Hopefully, if you find yourself employed to write you have plenty of inspiration and no shortage of ideas.

My kids need to be reminded sometimes how to come up with an idea to write about. We'll prattle off lists of topics and ideas, hoping to be so mundane that they come up with something that will interest them on their own. "Dryer lint, speed bumps, how many shades of blue does paint come in?"

Let's look back at a few older posts and talk some more about dreaming.


Journaling and especially dream journals are great ways to collect bits of stories that can be pulled from later. A twelve-year-old won't believe you if you tell her this. She'll have to figure that out on her own first.  She won't believe that she'll dream MORE if she merely pays attention to the dreams she's already having. Then, after she has tuned in, she'll find that the dreams flow whether she's paying attention or not. If she's right there in the morning ready with a pen to collection them in her journal, she'll have an endless supply of ideas to cull.

I wonder if many of the writers we follow have used inspiration from their dreams to work out their stories.